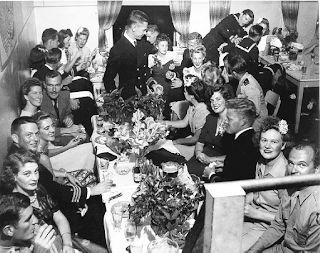 As time inexorably marches on it does what man was unable to do.

Stop a man of great spirit and fortitude.

Man o' Law salutes Captain Eric Barr as he embarks on his final journey.  One we will all eventually take.

Thank you Sir for your service.

Captain Barr is pictured as a Commander in this WWII photo taken at a party in Perth, Australia.  It is  from the website ussbluegill.org.

He is seated on the left, the third person from the bottom of the photo.  (Three stripes on his jacket sleeves)

The longtime San Antonian died Monday. He was 98.

“He was a perfect gentleman,” said Najmieh Barr, his wife of 24 years. “He had a lot of integrity and honesty, the core things he learned at the Naval Academy.”