Another casualty in the Mexican Drug Wars 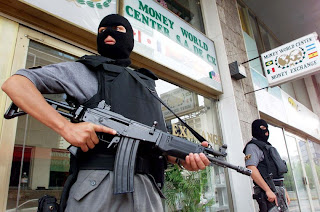 Police do not equal trust.

The murder scarred a part of Mexico that was supposed to be reasonably safe from violence and crime. Santiago is a picturesque town of waterfalls, colonial churches and holiday homes for the rich. Its mayor Edelmiro Cavazos was a blue-eyed 38-year old, educated in the United States. But it seems that no corner of the country is shielded from the relentless rain of drug-related bloodshed.

The killers came for Mayor Cavazos in the early hours of Aug. 16 when seven SUV's rolled up and men in police uniforms descended on his palatial home. Servants stood back terrified, as their boss was forced away at gunpoint. On Aug. 18, his corpse was dumped on a nearby road. There was a mercy of sorts in the manner of his killing - shot dead with two bullets in the head and one in the chest, and spared the mutilation and rape inflicted on so many other victims. The following day, hundreds of residents wept over his coffin in Santiago's central plaza, lining the stairs up to the church with candles and holding signs calling for peace. (See pictures of Culiac[a {a}]n, the home of Mexico's drug-trafficking industry.)

Then on Aug. 20, more disturbing news broke. State agents arrested six of the mayor's own police officers and said they confessed to involvement in the murder. The suspects had been working for a drug cartel that is fighting a bloody turf war with its rival throughout northeast Mexico, state prosecutors said. Another four alleged gunmen were arrested with automatic rifles and grenade launchers in their possession and accused of being involved in the plot. The revelation had very concerning implications: in Mexico's drug war, officials are now killing officials.