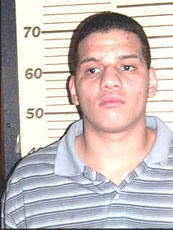 Big Man kicking a two year old and cutting his wife's arm.  Give him plenty of time to think about it in the cooler.

A man suspected of slapping and kicking his wife's toddler after the child soiled her pants was in Bexar County Jail on Wednesday.

Robert Lee Valles Jr., 24, was arrested Tuesday on one count of aggravated assault with a deadly weapon and one count of assault of a child with bodily injury. A judge set bail at $100,000.

Police spokesman Matthew Porter said the husband became angry during an argument at the couple's home in the 5400 block of Santa Cruz Street about 7:30 p.m. Tuesday.