BOLO for Britain's most disgusting woman! 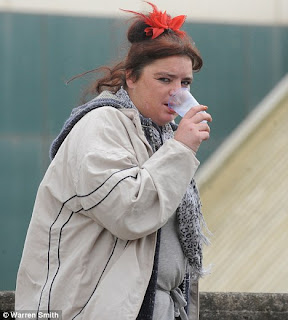 I haven't seen her in person, but what she did was pretty reprehensible.

A hunt was on Sunday for the woman branded "Britain's most disgusting person" for urinating on a war memorial after she fled court following a public shaming by elderly veterans.

An arrest warrant is out for Wendy Lewis, 32, who was given a "guard of dishonour" by angry veterans when she appeared at Blackpool Magistrates Court.

She was caught on security cameras relieving herself on the seaside town's Cenotaph, before performing a sex act on a man nearby.

Lewis was found guilty of outraging public decency and was due to be sentenced Friday.

But after turning up 40 minutes late at court, she vanished before her case began.

Veterans wearing smart uniforms and campaign medals lined up outside to give her a slow handclap. They shouted "Disgusting!" at she went inside.

"It is unforgivable what she did in the face of these dead men," said former Royal Marine James Baker, 88, who was one of few from his unit who survived the Normandy Landings.

"It can be neither forgiven nor forgotten by the ex-services' community and the wider community as well.

"If she had expressed remorse, and meant it, we could forgive then, if not forget. But I'm sorry, she is just beyond the pale."

Alongside him was Don Aiken, 85, who also saw action on D-Day.

He said: "We have all come to show our disgust at the actions of this woman on the Cenotaph, which is sacred to ex-servicemen personally, because it holds the names of so many of our comrades who died in two world wars to defend the freedom of our nation."

If Lewis is arrested Sunday she will be held in the cells until court resumes Monday.

Lewis was dubbed "Britain's most disgusting person" by Ian Coleman, of the Royal British Legion veterans' charity, after an earlier court appearance.
Posted by Sam at 4:46 PM