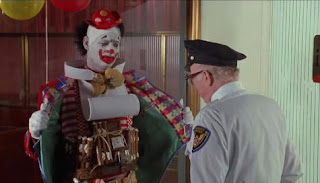 I always thought clowns could be creepy.

Just read It, or rent the movie.

BETHLEHEM, Pa. (AP) -- Police in northeastern Pennsylvania have arrested a woman they say robbed a bank in a clown costume.
Bethlehem police said the woman was captured about five minutes after the bank robbery late Friday morning. Her name has not been released.
Police said the suspect told bank employees she had a bomb, and fled with an unknown amount of cash.
Arriving officers say they chased her to a nearby park and nabbed her changing out of the clown suit in her car.
A bomb squad robot checked out items found in the car, including the clown suit and a multicolored wig. No explosives were found.
No one in the bank was injured.
Posted by Sam at 10:12 AM