The jury should have thrown him away 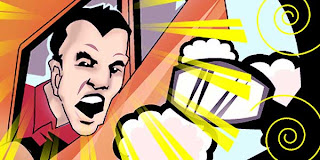 Have we become so jaded as a society that 7 1/2 years is justice in a murder case?

I mean even if the deceased caused the road rage incident the defendant followed him and drove 6-7 miles before catching up to him and shooting him to death.

What is it?  Self-defense?  The deceased was a punk?  Whatever, the sentence sure doesn't seem to fit the crime.

Jurors sentenced a San Antonio man to 7½ years in prison Thursday for the shooting death last year of another motorist following a minor accident.

Roy Vicente Bolado, 62, had faced five years to life in prison for the Jan. 26, 2009, murder of Anthony Vasquez, 23. Prosecutors had asked the jury, which found him guilty Wednesday, to consider the higher end of the punishment range.

But after four hours of deliberations, the group appeared to agree with defense attorney Cornelius Cox that a longer sentence “would be tantamount to just throwing him away.” Bolado didn't deserve that, given the circumstances of the shooting, Cox argued.