Chef on the half-shell 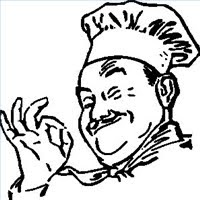 In some strange way this is appropriate?  No?

Paris, France (CNN) -- The body of a retired restaurateur who's been missing for two years has been found in a freezer in the French city of Lyon, police there told CNN Wednesday.

The corpse of Jean-Francois Poinard, 71, was discovered Tuesday in the apartment he had shared with a girlfriend in Lyon, regarded as the culinary capital of France.

Police said an autopsy will be conducted.

The French newspaper Le Monde cited a police source as saying the man's girlfriend, 51, has been taken into custody in connection with the case.

Police said the body was found after a tip from a close family member of Poinard, who was considered one of Lyon's top chefs in the 1970s and 80s.
Posted by Sam at 6:32 PM