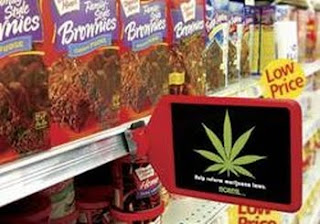 Grandpas taking pot to his grandson in prison!

LEBANON, Ohio (AP) -- An 85-year-old Ohio man was arrested for trying to smuggle pot to his grandson in prison, authorities said. Prison records show Richard Heritz was arrested at the Warren Correction Institution in southwestern Ohio earlier this month before he got to see his grandson, Gregory Heritz, who was serving time for a burglary conviction.
Someone had tipped off state troopers that the elder Heritz tried to bring in a package with more than 20 grams of marijuana.
He's charged with attempting to convey drugs at a detention facility and possessing criminal tools. He could face up to seven years in prison and a $15,000 fine if convicted.
It wasn't clear if either of the Heritzs had a lawyer. The younger Heritz had been incarcerated for two years and is scheduled to serve eight more.
"Attempting to smuggle forbidden items into prison has been ongoing since inmates have been incarcerated," said Julia Bush, a spokeswoman for the prison where Heritz allegedly tried to smuggle drugs.
State Highway Patrol officials say prisons have investigated 168 smuggling incidents at detention centers so far this year.
Attempted smugglers are usually a relative or spouse, officials said. Prisons keep records of all approved visitors.
Police say prisoners - like Heritz's grandson - don't face additional criminal charges as long as authorities arrest the attempted smuggler before the inmate gets the drugs.
But prisoners who have someone try to smuggle drugs usually face disciplinary action in the prison - like a temporary transfer to an area with more rules.
Posted by Sam at 8:04 AM