Yield the right of way to emergency vehicles 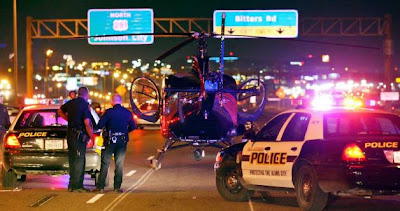 Nice landing; made it seems, under emergency conditions.

Regarding traffic being snarled, heck, if someone spit out their window, it'll snarl traffic at 281 and Bitters.

The pilot and an observer aboard weren't seriously injured in the 7:20 p.m. incident, although the observer complained of back pain, said San Antonio Police Chief William McManus. He declined to identify the pair.

Traffic was snarled for hours in the northbound lanes south of Bitters Road as vehicles were forced into two lanes.