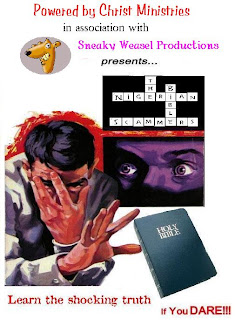 Preying on the religious. Perverting religion for their own benefit.

They still believe they were helping folks?


Three men who called themselves the "3 Hebrew Boys," using the Biblical story of faith to create a scheme that prosecutors said fleeced thousands of people out of more than $80 million, will each spend decades in prison.

Timothy McQueen, 52, and Joseph Brunson, 47, were each sentenced to 27 years in prison and Tony Pough, 48, was sentenced to 30 years Tuesday after a daylong hearing. The three, all from Columbia, were convicted in November 2009 of 58 counts each of mail fraud, money laundering and other charges.

Prosecutors said the three men traveled to churches and other gatherings across the Southeast several years ago and spoke to soldiers near military outposts, preaching how faith and an investment in what they said were foreign currencies would at least double their money, wipe out credit card debt and pay off mortgages in months.