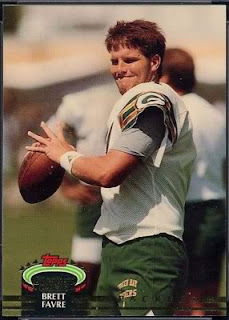 The last time Brett Favre did not start in an NFL game George Herbert Walker Bush was President and Bill Clinton had just been elected president for the first time.  Boys to Men were popular and Eric Clapton had come out with Tears in Heaven and Layla.

You went to the movies to watch Reservoir Dogs, A League of Their Own, and A Few Good Men

Brett Favre is inactive for the Vikings’ Monday night game against the Giants, bringing to an end his NFL-record streak of 297 consecutive starts.

Favre suffered a shoulder injury eight days ago when he was hit by Bills linebacker Arthur Moats, and he’s not ready to return. Although the Vikings were still holding out hope today that he could play, Favre’s shoulder was hurting badly enough that he never even took the field for pregame warmups.