I think I'll pass on visiting the area 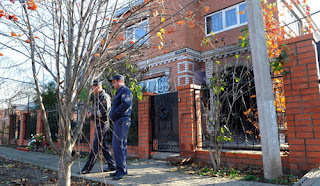 Oh and massacring the local folks who protest.


Mob-ruled Kushchevskaya is one of many, protesters claim
The gangsters’ grip over Russia stretches far beyond headline-grabbing Kushchevskaya – and the site of an infamous massacre is becoming a byword for lax policing.

Seven people from Volgograd Region have been detained after a staging an unauthorised rally to call for a proper investigation into a murder in their home village.

And they allege that Korostino is another town where the mob rules with the tacit approval of the authorities.

While the demonstration outside the Interior Ministry building in Moscow ended in detention, Volgograd’s governor Anatoly Brovko reacted quickly to the link to Kushchevskaya.

Perhaps mindful of the president’s interest in that case, he ordered a probe into the situation in Korostino, where Sevdin Asanyan’s murder remains unsolved one year on.

The protests called for renewed efforts to catch the gangs which rule Volgograd Region by fear.

Five of the people detained were relatives of Asanyan, who was gunned down in his car in 2009.

The governor may face a battle with the local investigation committee after they denied there was any case to answer.

“The protestors represent just one side of the conflict. Their claims on rampaging criminals have no grounds behind them,” Volgograd regional Investigation representatives told Interfax-Yug. They also said: “The case hasn’t been solved yet because there are no suspects, but the investigation is still ongoing.”

Alexander Novikov, head of Korostino, believes a blood feud is the motive behind Asanyan’s murder. Asanyan had allegedly helped a relative to escape punishment after killing a representative of another clan in a fight.

“In revenge the defender was killed himself. They just stopped his car and shot him. It wasn’t a terrorist attack,” he told Novye Izvestiya. The investigation committee hasn’t made any statement yet on gang wars allegedly happening in their district.

In this case the Kushchevskaya connection may tenuous, but experts anticipate similar stories to emerge from all over Russia.

Natalya Taubina, the director of the “Public Sentence” foundation, told Novye Izestiya: “People have got a feeling now that they can be heard by the government, and they finally have a hope for the law to rule in their region.”

One town where hopes are cautiously rising is Gus-Khrustalny, a picturesque glass-making centre in Vladimir Region.

Russia’s chief investigator Alexander Bastrykin is visiting on Wednesday to hear claims of laissez-faire policing while gangs roam free.
Posted by Sam at 6:48 AM