Okay it will either be warmer or hotter. 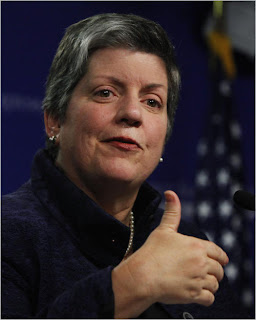 What is wrong with this fool?

I mean really?  Climate change and the Coast Guard?

Sure make some emergency plans then get back to protecting us.

You know feel up some more airplane passengers.  *snort*


(CNSNews.com) - At an all-day White House conference on "environmental justice," Homeland Security Secretary Janet Napolitano announced that her department is creating a new task force to battle the effects of climate change on domestic security operations.
Speaking at the first White House Forum on Environmental Justice on Thursday, Napolitano discussed the initial findings of the department’s recently created "Climate Change and Adaptation Task Force."
Napolitano explained that the task force was charged with “identifying and assessing the impact that climate change could have on the missions and operations of the Department of Homeland Security.”
According to the former Arizona governor, the task force would address specific questions, including:
“How will FEMA work with state and local partners to plan for increased flooding or wildfire or hurricane activity that is more serious than we’ve seen before? What assistance can the Coast Guard bring to bear to assist remote villages in, for example, Alaska which already have been negatively affected by changes up in the Arctic?”
The findings from the Homeland Security Department (DHS) also asked: “(H)ow can we focus on how climate change is going to affect our rural citizenry including those who live along our boarders both northern and southern?”
Napolitano did not elaborate on the new task force and the Department of Homeland Security has yet to respond to requests by CNSNews.com for additional information on the task force.
The conference did not define “environmental justice,” and the only reference to the task force that can be found is on the DHS Web site. The June 2010 Department of Homeland Security Strategic Sustainability Performance Plan states “climate change has the potential to accelerate and intensify extreme weather events which threaten the nation’s sustainability and security.”
This plan also noted: “Many USCG [Coast Guard] and Customs and Border Protection facilities, by their mission, are located in the coastal zone which will be adversely impacted by sea level rise.  Costs will increase for protecting existing facilities from the impacts of sea level rise and some facilities might have to be abandoned in the longer term.”
The all day White House Forum on Environmental Justice also included talks by White House Council on Environmental Quality Chair Nancy Sutley, EPA Administrator Lisa P. Jackson, Attorney General Eric Holder, Secretary of the Interior Ken Salazar, Secretary of Labor Hilda Solis, and Secretary of Health and Human Services Kathleen Sebelius.
Posted by Sam at 7:54 AM