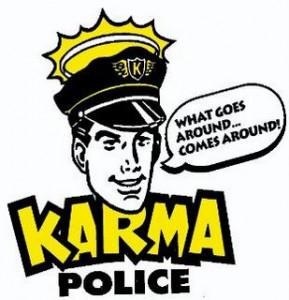 Call it what you will but it sure seems appropriate to think that doesn't it?

The boys, who were in the car, weren't injured at all.


INDIANAPOLIS (AP) — Indianapolis police say a man stabbed his wife to death while their three sons were home with them, then lost control of his vehicle and struck a tree, killing himself.

Officer Kendale Adams says police got a call to the couple's home about 5:30 a.m. Sunday. Adams says the fatal crash happened about four blocks from the home.

Adams says the couple's children are 8 to 15 years old and weren't physically injured. They're now in the care of nearby relatives.

Adams says the woman was 44 years old. Police aren't releasing her name ort that of her husband.
Posted by Sam at 7:01 AM