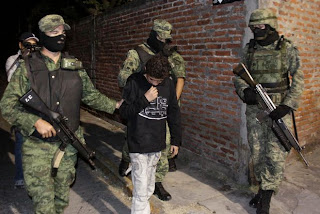 I guess there is no age limit for recruiting hitmen for the drug cartels.

How does one rehabilitate a 14 year old who openly admits to having killed at least 7 people?

Of course he claims that he was forced to behead the folks.

Perhaps he was, he claims:

"I participated in four executions, but I did it drugged and under threat that if I didn't, they would kill me," the boy said calmly when he was handed over to the federal prosecutor Friday morning, showing no remorse.


MEXICO: Mexican soldiers captured a 14-year-old US citizen suspected of being a drug gang hitman as he attempted to travel to the United States.

The boy was caught late on Thursday as he boarded a plane in the city of Cuernavaca in Morelos. He was traveling to the border city of Tijuana across from San Diego, California , with two of his sisters, one of whom is believed to be the lover of one of the cartel's bosses, the army said.

The three Jimenez siblings reportedly had wanted to cross to San Diego, where they have relatives. "El Ponchis" made headlines last month as reports of his grizzly murders, including beheadings, surfaced . He acknowledged having killed at least seven people and the influence of drugs provided by a cartel leader, according to the army statement.