How the Grinch stole Christmas.......almost 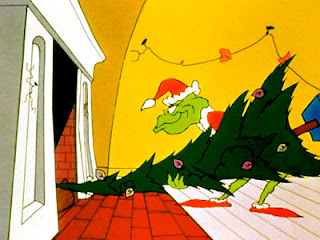 No doubt about it.

Stolen toys from Toys for Tots are seized
By Jackie Ward - WLBZ2.com

BANGOR, Maine (NEWS CENTER) -- Thousands of dollars worth of toys were seized from a home on Patten Street in Bangor this afternoon. Police say there were stolen from the "Toys for Tots" program.

Bangor Police say they received a tip a couple of days ago that a Patten Street resident had a large amount of toys in his home, and the man living there was a volunteer for the Toys for Tots organization. Officials say based on that information, they went to the home and confiscated an estimated $7-10,000 worth of new toys that were intended for needy families.
Some of those toys included $2,700 worth that the Bangor Fire Department had just bought the night before.

Police are not releasing any names at this point, but Skip Young, the Director of Toys for Tots in Greater Bangor, says the man's name is Jim Nickerson and he was selling the toys on eBay.
Nickerson has been a part of the organization for three years and was like a family member to Young and his wife. But Bangor residents are hopeful that Toys for Tots will be able to recover from this incident quickly.
"My heart fell, you know, because he had access to everything and we trusted him completely," Young said.

"I think it's ridiculous. It's the time of year to be giving where people are usually giving. For them to be taking right now is...sometimes you question what people are up to, and hope that people will come through and salvage something for them," Chris Rudolph, Brewer resident, said.

Young says that Nickerson has tried calling him to apologize several times, but that an incident like this is something that he won't be able to forgive anytime soon.

Nickerson's name was on the mailbox at 108 Patten Street.