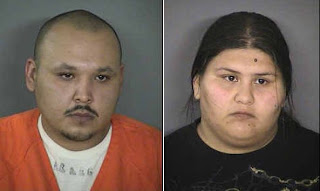 Neither of the Defendants look like they missed many meals.

I hope the child recovers fully.

A San Antonio man was sentenced to 40 years in prison Tuesday for the severe starvation of a 4-year-old whose sole meal each day usually consisted of Cheerios.

Luis Valenzuela, 27, and fiancee Robin Palafos, 24, were arrested in February after they brought the child to a clinic for vaccinations. The girl weighed 23 pounds at that time, authorities said.

Valenzuela pleaded no contest in November to injury to a child. In exchange, prosecutors agreed to ask for no more than 40 years in prison. His attorney sought deferred adjudication probation.