And he shall be called Levon 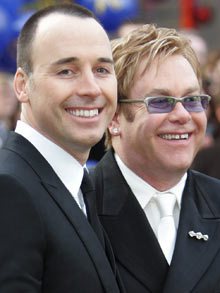 Best wishes to the Dads.


The boy, who has been named Zachary Jackson Levon Furnish-John, was born on Christmas Day in the United States.
“We are overwhelmed with happiness and joy at this very special moment,” they said in a statement issued to magazine Us Weekly. “Zachary is healthy and doing really well, and we are very proud and happy parents.” The rock star’s spokeswoman confirmed the report but said no details of the surrogacy arrangement would be disclosed and they intended to respect the privacy of the surrogate. The boy weighed 7 pounds 15 ounces and was 22 inches long.
John, 63, and Canadian filmmaker Furnish, 48, have been together since the early 1990s. They entered into a civil union in 2005 and tried to adopt an AIDS-infected orphan in Ukraine last year, but were thwarted by government regulations.
Their son’s middle name “Levon” is thought to be a reference to John’s 1971 song of the same name, whose lyrics were written by his long time collaborator Bernie Taupin and inspired by drummer and singer Levon Helm.
Speaking in January the singer said: “David and I have always talked about adoption, David always wanted to adopt a child and I always said 'no’ because I am 62 and I think because of the travelling I do and the life I have, maybe it wouldn’t be fair for the child.” But he said he had changed his mind after their “hearts were stolen” by the child they met in Ukraine, who they were not allowed to adopt. He said he now felt he could “give a future” to a child.