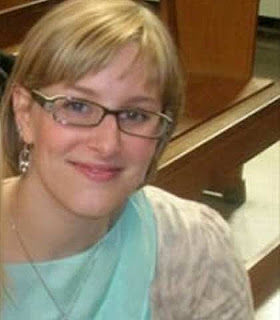 Someone out there knows what happened.

Rest in Peace, Joanna.  My condolences to your friends and  family.

They said at this stage they are treating the death as suspicious, but are waiting on the results of a post mortem examination.

The discovery was made at 9am on Saturday by a couple walking their dogs in the Failand area of North Somerset.

An Avon and Somerset police spokesman said: "We are satisfied the body is Joanna Yeates, but this is pending the results of a post-mortem which is not expected for at least 24 hours due to the nature of how she was found in such extreme conditions."

The remains, clothed and covered in snow, were discovered on a country lane three miles from where the 25-year-old was last seen alive eight days ago.

The last known sighting of Joanna Yeates, known to her friends as Jo, was on CCTV as she bought a pizza at a branch of Tesco Express in the Clifton area of Bristol on the evening of December 17.

The university graduate, who worked as a landscape architect for BDP, was making her way home to the flat she shared with her boyfriend, Greg Reardon, after a night out with work colleagues in Bristol city centre.

Reardon, 27, reported her missing on Sunday night after returning home to their flat in Canynge Road, Clifton, from a weekend away in Sheffield visiting family.

Friends launched a campaign to find her by putting up posters across Bristol and setting up a website and a page on Facebook and using Twitter.

The night Joanna Yeates vanished, she left the Ram pub in Park Street at about 8pm and as she made her way home she rang her best friend, Rebecca Scott, to arrange to meet on Christmas Eve.

She was caught on CCTV in a Waitrose supermarket at the Clifton Triangle and then went to the Tesco Express on Regent Street - a quarter of a mile from her flat.

Officers released footage of her buying a pizza in Tesco, which has become a key part of the investigation.

There was no trace of the pizza, the wrapping or the box in her home - despite the fact that the receipt, the coat she was wearing, and her mobile phone and keys were inside.
Posted by Sam at 4:56 AM