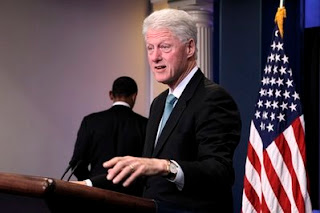 Admit it.  This was beyond exceedingly strange.

Can you just imagine if George W. Bush had done this?

The media would have never stopped at screaming this proves W's incompetence that he had to get another former president to step in for him.

I don't hear them saying anything.  Do you?

WASHINGTON (AP) -- No comment? No way. You don't stop Bill Clinton when he's back at the White House with something to say.

Well, OK. He and President Barack Obama, two of the most famous men in the world, did need a little help getting a door unlocked first.

But then it was on.

The former president came before surprised reporters to let it be known that he endorsed the tax deal that Obama cut with the Republican Party, even though many Democrats were raising a fuss about it.

That was the news. But it wasn't the story.

What had the West Wing buzzing was the scene itself: Clinton in his element, like he had never left. And almost like he wasn't going to leave this time.

For one remarkable half hour, Clinton turned a seemingly slow Friday afternoon into his stage.

He tutored in loving detail about economic theory and nuclear disarmament. He was short on time, yet somehow found some for just one more question. He bit on his lip and spread his arms as he spoke and did all those other familiar gestures.