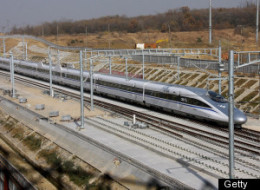 We need this here.

BEIJING (AP) - A Chinese passenger train hit a record speed of 302 miles per hour (486 kilometers per hour) Friday during a test run of a yet-to-be opened link between Beijing and Shanghai, state media said.

The Xinhua News Agency said it was the fastest speed recorded by an unmodified conventional commercial train. Other types of trains in other countries have traveled faster.