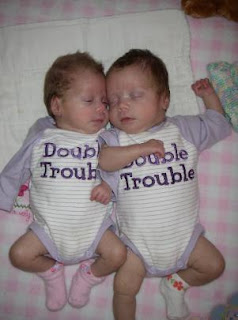 No excuse for this behavior.  Even if you are stressed out, get help, don't beat the babies.

Adrian Maldonado Jr., 29, is set to be booked in Bexar County Jail on two counts of injury to a child with serious bodily injury. A judge set bail at $200,000.

An arrest warrant affidavit states Maldonado and the girls' mother live together in a home in the 300 block of La Manda Boulevard. Around 2 a.m. Saturday, the mother was feeding one of the couple's 48-day-old daughters but she was being fussy, officials said. The mother needed to feed her other baby, police said, so Maldonado took the one who'd already been fed. Authorities said the mother could hear her infant “scream crying” in the other room, and then she suddenly stopped, authorities said. Maldonado put the baby to bed, and offered to take the second girl from her mother, saying he would “walk her to sleep,” the affidavit states.