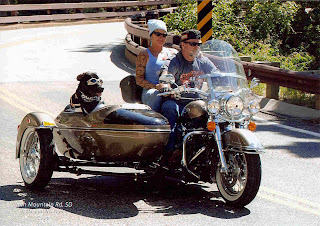 When I first looked at this I wondered how he had drifted off into the east-bound lane of 46.  I've ridden my motorcycle there, but then I know how sharp the curve is too.

I think it must've been a combination of the fact he's from Brownsville and may not have been aware of the curve and the fact he had a side-car on the motorcycle.  They don't hold the curves as well, especially if you may have entered the curve too fast.

A Rio Grande Valley man was killed and two young people, one of them a 3-year-old, were injured when a motorcycle and truck collided on a winding road outside Boerne.

Department of Public Safety investigators said Adam Daniec of McAllen was riding a 2005 Harley-Davidson motorcycle west on Texas 46 about four miles west of Boerne shortly before 1 p.m. Saturday when he drifted into the eastbound lane on a sharp right turn.