Stealing the dog too? 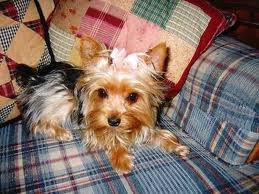 This is pretty low.

Even for a Christmas Season burglar.

A Mesquite family is off to a bad start to the holiday season after burglars stole its dog and all of its gifts over the weekend.

Most of the stolen gifts belonged to 13-year-old Cameron Rusaw. But Cameron, who was too upset to go to school Monday, said he misses his dog more than anything.

"I'm not worried about any gifts," he said. "I just want my dog back."

Stacy Rusaw said she can't take the fact that her dog is not home safe.

"Without us, we know she's scared," she said. "She's a sweet little dog, and even if you are enjoying her, bring her back to us where she belongs, because it's not fair. She didn't do nothing."

The family said it believed the burglars broke in through a window. Family members said they found window screens outside on the ground.

The family said the thieves also stole small electronics, DVDs and a coin collection Cameron inherited from his grandfather.

Mesquite police are investigating the robbery. The Rusaws are asking anyone who sees 2-year-old Candy or has information on the dog to contact Mesquite police.
Posted by Sam at 6:53 PM