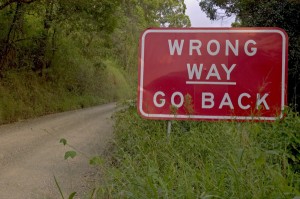 How about driving the wrong way?

Was alcohol also a factor?

A suspected wrong-way driver was killed in a head-on collision on the far South Side early Saturday.

Victor Santana, 40, died at the scene of the crash on Applewhite Road near Watson Road around 1:30 a.m. Saturday, officials said.

Santana was driving a blue sedan south on the northbound lane on Applewhite, not far from the Toyota Manufacturing plant, when he struck an SUV, authorities said. The driver of the SUV, a 25-year-old woman, and her male passenger sustained injuries not thought to be life-threatening, authorities said.