Adios Calvin, don't let the door hit you in the ass on your way out 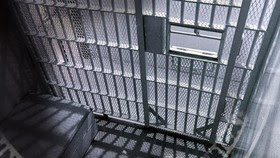 For all intents and purposes a 60 year prison sentence in Texas is equivalent to a life sentence.

Man gets 60 years for 2nd killing since 1997
A SAC student who had nothing to do with gunbattle was shooting victim.
By Craig Kapitan - Express - News

A San Antonio man convicted by a jury earlier this month of a mistaken-identity revenge killing was sentenced Thursday to 60 years in prison after it was revealed he's already served time for another slaying.

Because of the prior prison term, Calvin Jackson, 31, faced a minimum sentence of 15 years as he asked state District Judge Raymond Angelini to determine his punishment. Prosecutors Tanner Neidhardt and Wendi Wilson-Ortiz asked for a life sentence.

“When you set aside all the excuses, Calvin Jackson took two lives,” Neidhardt said, pointing out that if the slayings had occurred at the same time Jackson's only options would have been life without parole or the death penalty.