Its not a job its an adventure 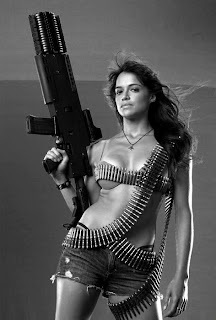 Nope, I don't believe that Michelle Rodriguez is one of them.

MEXICO CITY (Reuters) - Dwarfed by surrounding reporters and with her head bowed to avoid the television cameras, the slender 16-year-old hesitated slightly before she answered the question. "I'm a hitwoman," she said.

Maria Celeste Mendoza was among six teenage suspected gang members arrested this week by police after a shoot-out with authorities in central Mexico, one of the growing ranks of young people working for the country's drug cartels.

Dressed in combat fatigues and with her face hidden, the girl from the northern border state of Tamaulipas described how she had been trained to use Kalashnikov assault rifles and other weapons by the Zetas, one of Mexico's most brutal gangs.