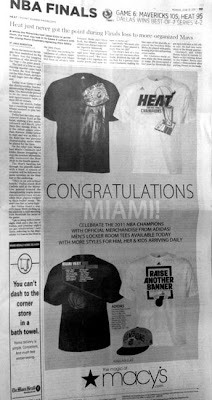 Man, how embarrassing is this?

At least as embarrassing as the Heat's loss to the Mavs?

MIAMI (AP) — The Dallas Mavericks' win over the Heat is a huge upset for basketball fans in Miami. Making matters worse, an ad in the local paper has mistakenly congratulated the Heat on winning.

A full-page ad that ran in Monday's Miami Herald reads "Congratulations Miami" next to photos of Heat championship T-shirts and hats from Macy's. One T-shirt reads "Heat 2011 NBA Finals Champions" and the ad shows the Heat's logo on a hat with the words "NBA Champions."

The ad ran under a story about the Heat's loss.