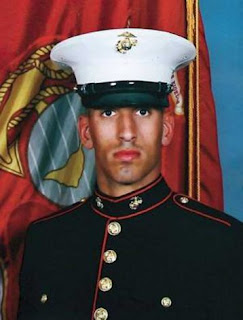 It is with great sadness that I learned of the loss of another young local man in the prime of his life.  He died to preserve our freedom and liberty.

Rest in Peace Lance Corporal John Felix Farias.  As long as men yearn for freedom you will not be forgotten and your sacrifice will be honored.

Peace be unto you and your family.

John Felix Farias used to spend Independence Day at work as a lifeguard on the Comal River, protecting tubers who soaked in the sun on America's most patriotic holiday.

Tuesday, during combat operations in Afghanistan, all of his dreams of July Fourth barbecues and of someday marrying and raising a family came to an end. Farias, 20, a Marine Corps lance corporal, was killed in the turbulent Helmand province on his first combat tour. He would have turned 21 on July 16.

Like many young Marines, Farias had a rock-solid background as an all-American boy, countered by a rugged edge as a young man headed to war for the first time.