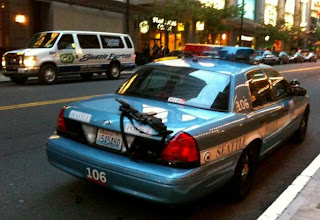 This was a pretty stupid stunt to pull wasn't it?

Or is it a hoax?  I hope hoax for the officer's sake.

Whitcomb says two people spotted the rifle on the parked car. One flagged down bicycle officers to alert them. The other followed the cruiser as it drove through downtown Seattle and tracked down the driver after the car parked.

The alternative weekly The Stranger first reported the incident, posting a picture that shows the rifle sitting on top of the trunk.