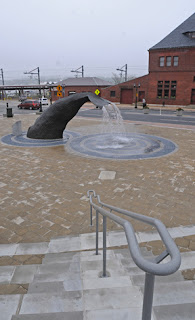 What the heck is wrong with people?

Doesn't any one know how to behave decently any longer?

NEW LONDON, Conn. (AP) — Officials in New London, Conn., turned off the water at the city's new waterfront fountain over the weekend, because people have been using it as a toilet.

The fountain was activated last month and features a sculpture of a whale's tail with water spilling over it, which visitors are encouraged to run through.

City Councilor Michael Buscetto III tells The Day of New London that since the fountain opened, police have responded to calls of people urinating, defecating and showering in the fountain water. He said some people who have cut themselves have also used the fountain to rinse off blood.

City Manager Denise Rose says police are developing a plan to better keep an eye on the area.