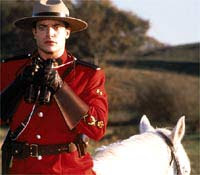 This looks like a job for Dudley Do-Right of the RCMP!

Vancouver Canucks supporters clashed with police after their team's home loss to the Boston Bruins in the deciding game of the Stanley Cup Final left at least 70,000 fans with nothing to celebrate.

Boston's 4-0 win at Rogers Arena sealed its first National Hockey League championship since 1972. Some Canucks fans broke windows, looted shops and set fire to cars, including at least two police vehicles, in downtown Vancouver after the loss, which extended the team's four-decade drought without an NHL title.

“It's absolutely disgraceful,” Mayor Gregor Robertson told reporters, adding that police were being brought in from outside the city to quell the violence. “We will deal with the troublemakers.”