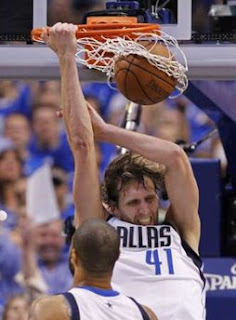 You played your hearts out and you proved that a great team can beat a team of great players.

MIAMI -- For Dirk Nowitzki, the resume is complete. He's an NBA champion.

For LeBron James, the agonizing wait continues for at least one more year.

A season that began with Miami celebrating the signings of James, Dwyane Wade and Chris Bosh -- along with the promise of championships -- ended on the very same floor, with the Dallas Mavericks hoisting the title trophy for the first time in their franchise history after beating the Heat 105-95 on Sunday night. The Mavericks won four of the series' last five games, a turnabout that could not have been sweeter.