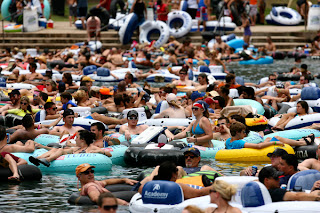 Its Summer in New Braunfels.


NEW BRAUNFELS - New Braunfels Police Chief Tom Wibert likened the crowds of tubers on the Comal River at peak times to "the Normandy Invasion" and said he'd like to see a river that is "less of an MTV environment and more of a family environment."

Wibert and Fire Chief John Robinson reported to New Braunfels City Council on Monday about tubing conditions on the Comal River in what Wibert termed "a strange season."