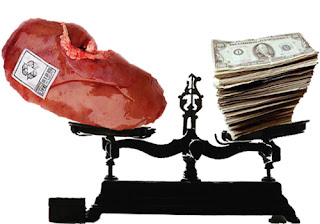 A wee bit ghoulish, no?

Its ironic to lead to off this story with a reference to  Steve Jobs who has been accused of gaming the system to get his liver transplant. See that story here.

BEIJING - Steve Jobs, the American IT icon who founded Apple Inc and gave the world its iPods and iPhones, probably never imagined that a young man in China would sell one of his own kidneys in order to buy an iPad 2.

"Xiao Zheng," a 17-year-old technophile, sold one of his kidneys for 22,000 yuan (3,300 US dollars) through an underground dealer. He used the money to buy an iPad 2 and a laptop computer.