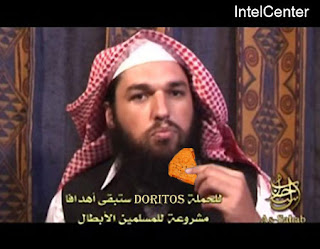 Can he be the first one we shoot?

Gee.  You think he's trying to start a religious civil war in the States?

Wait!! Is that a fried pork rind??  Oh, its a Doritos chip.  I wonder if its fried in lard?

"What are you waiting for?" asks Gadahn in English, and then adds that jihadis shouldn't worry about getting caught, since so many have been released. "Over these past few years, I've seen the release of many, many Mujahideen whom I had never even dreamed would regain their freedom."

The two-part, two hour video appeared on jihadi websites Friday with images of jihadi leaders as well as snapshots of alleged underwear bomber Umar Farouk Abdulmutallab and accused Fort Hood shooter Major Nidal Hasan. Both Hasan and Abdulmutallab are charged with carrying out attacks inside the U.S.