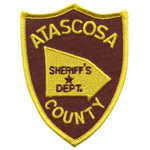 Atascosa County deputies arrested three people and confiscated $18,000 worth in drugs after a brief pursuit that took them into Bexar County, but the suspect they were chasing eluded capture.

The chase began shortly before 11 a.m. in the Shalimar Village subdivision in Atascosa when a deputy started following the vehicle of a man wanted on Bexar County burglary warrants, Atascosa Chief Deputy Sheriff David Soward said.

The man, who was traveling with three passengers, fled about seven miles north into Bexar County, then turned around just north of the Medina River and went into another private subdivision near the Atascosa County line, Soward said.