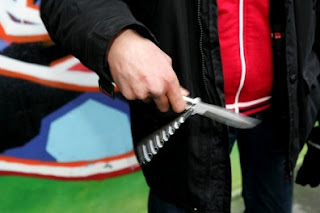 I think he'll be certified to stand trial as an adult.

Teenager could face trial as an adult
He is accused of killing retired Army sergeant by stabbing him 42 times.
By Eva Ruth Moravec - Express-News

A teenager accused of killing a retired U.S. Army sergeant last April — stabbing him more than 40 times in the torso, face, neck, head, arms and genitals — could face trial as an adult for the gruesome slaying, authorities said.

The boy, 16, remains unidentified because he's a juvenile. He was charged with murder after San Antonio police found him by following a blood trail from the second-story apartment of George Izer, 59, to a nearby residence, authorities said.

A hearing is set for July 1 to determine if the teen should be tried as an adult.