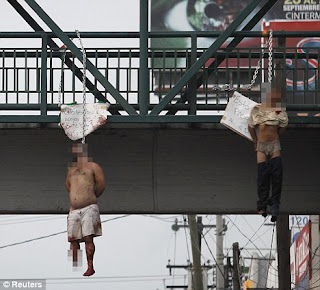 Just when you thought it couldn't get worse comes this.

They are the gruesome images that are testament to the trouble that has hit one Mexican city which has become a flashpoint for the war on drugs.

Two young men, cut down in the prime of their life, were left hanging from a pedestrian bridge as warring drugs cartels continue to fight in Monterrey

One of the men was was missing a foot and had been stripped down to just his underwear while the other's clothes were splattered with blood.