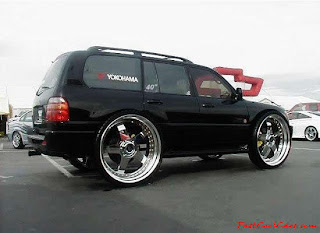 He should have just earned the money and bought some for himself.

And Momma, you can't apologize for him he's a 23 year old man.  He should have known better but apparently didn't.

Man gets death for killing motorist for tire rims
Kens-TV -

HOUSTON (AP) — Jurors in Houston have sentenced Teddrick Batiste to death for killing a 26-year-old motorist to steal the flashy wheel rims from his car.

The Houston Chronicle reports that after the sentencing for Horace Holiday's capital murder, Batiste's mother Rowena Scott could be heard yelling outside the courtroom, "I'm sorry for what my baby did! I'm sorry! I'm sorry!"

The Harris County jury sentenced the 23-year-old Houston man Thursday after convicting him in the 2009 killing.

Prosecutors say Batiste coveted the spinning chrome rims on Holiday's Cadillac on U.S. 59, so he drew alongside the car and opened fire. A wounded Holiday veered off the freeway, crashed his car into a gas pump at a service station and crawled in search of help. Batiste walked up and fired a fatal shot.
Posted by Sam at 8:34 AM