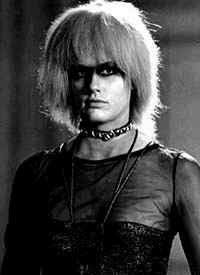 Term used in Blade Runner for Replicants and in Battlestar Galatica for the human-like Cylons.

A prominent San Antonio dermatologist accused of sexual misconduct by six women was ordered to wear an electronic monitoring device Friday, days after the Texas Medical Board suspended his license.

Calvin Day, 59, has been free on $175,000 in combined bonds since last month, when a Bexar County grand jury indicted him on two counts of sexual assault involving accusations by different patients.

Two other patients and two women who were not his patients have also accused him of sexual misconduct incidents at his office, according to Texas Medical Board documents. But because of Texas' statute of limitations, those complaints will not likely result in criminal prosecution, Assistant District Attorney David Henderson said Friday.