Antother way to get ripped off at the gas pump 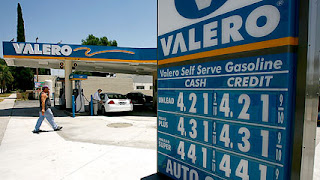 Good thing I don't go to that Valero gas station for gas.

Its the closest to me but easily the most expensive by 10 cents or more a gallon.  As I commute to New Braunfels I by pass it and go to one en-route to work.

Investigators haven't deciphered how much, if any, information might have been stolen from customers who swiped their credit cards at a gas pump found to have been tampered with at a Valero station in Hollywood Park.

The credit card “skimmer,” discovered Sunday evening when the gas pump wouldn't read credit cards, was removed by Valero's service department and turned over to Hollywood Park police the next morning.

“We're trying to find out what's on it, but we don't have the resources or technology to do that,” Hollywood Park Deputy Police Chief Joe Quintero said of the device, a bit of circuitry on a plastic housing with four wires extending from it. “We have to get Secret Service to help us on that.”