Flying with his pants at half-mast 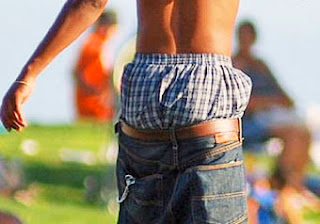 He ought to be embarrassed.

Even though its pretty much a much adoo about nothing.

Except aren't collegiate players supposed to represent their teams respectfully?

SAN FRANCISCO (AP) — A University of New Mexico football player who was arrested after wearing saggy pants onto a plane at San Francisco airport says he is embarrassed by negative attention surrounding the incident.

In a statement issued Friday through UNM, Deshon Marman said the incident is "not representative of either myself or the University of New Mexico football program."

He said the full facts of the matter will come to light in due time, and he would have no further comment.