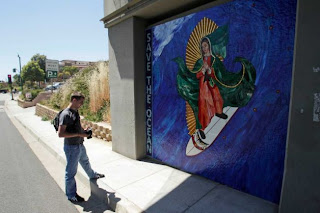 It is a pretty awesome mosaic isn't it?

SAN DIEGO (AP) — It's going to take a miracle to remove the Surfing Madonna, according to an art agency hired to run tests on an illegal public mosaic that has been sparking debate about what should be considered graffiti.

Assistant conservator Andrew Smith of Los Angeles-based Sculpture Conservation Studio said Wednesday that his agency will recommend officials in the beach city of Encinitas not only keep the artwork — but adopt a plan to protect it.

The artwork featuring the Virgin of Guadalupe riding a surfboard was put up under a train bridge shortly before Easter by artists disguised as construction workers, according to witnesses.