What a wiener Weiner is 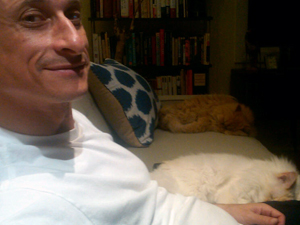 I know, I know.  Its easy to make jokes about this.

But he lied, he blamed it on a so-called hack of his Twitter or Yfrog account.  Yfrog shut their system down to see if they were hacked.  he even blamed Andrew Breitbart for making it all up.

Of course they weren't hacked and Breitbart didn't make it up.  He was just being a wiener.

At a tense press conference on Monday, the six-term New York Democrat admitted to posting a lewd photo of himself on Twitter. The stunning turnaround came following a week of him issuing nothing but denials and often getting surly with reporters, before cutting them off completely.

While addressing the media at the Sheraton Hotel in Midtown Manhattan, Weiner made the following statement: “Last Friday night I tweeted a photograph of myself that I intended to send as direct message as part of a joke to a woman in Seattle. Once I realized I posted it to Twitter, I panicked, I  took it down and said that I had been hacked. I then continued with that story to stick to that story which was a hugely regrettable mistake.”