Can I move to a different seat please? 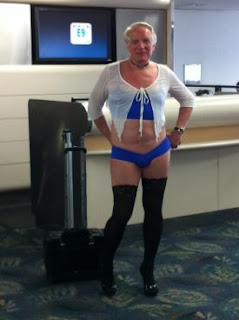 US Airways spokeswoman Valerie Wunder confirmed she'd received the photo before last week's incident in San Francisco and had spoken to Tarlow, but said employees had been correct not to ask the man to cover himself.

Six days before a college football player was arrested at San Francisco International Airport in a dispute that began when a US Airways employee asked him to pull up his sagging pants, a man who was wearing little but women's undergarments was allowed to fly the airline, a US Airways spokeswoman conceded Tuesday.

A photo of the scantily clad man was provided to The Chronicle by Jill Tarlow, a passenger on the June 9 flight from Fort Lauderdale, Fla., to Phoenix. Tarlow said other passengers had complained to airline workers before the plane boarded, but that employees had ignored those complaints.