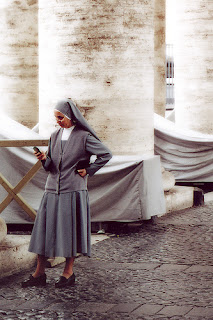 Pope Benedict XVI bringing it to the 21st Century.

Now will it be the good tweet instead of the good word?

The portal www.news.va for the first time aggregates information from the Vatican's various print, online, radio and television media. It's the latest effort by the Vatican to bring its evangelizing message to a greater, Internet-savvy audience and follows forays into Facebook, Twitter and YouTube.