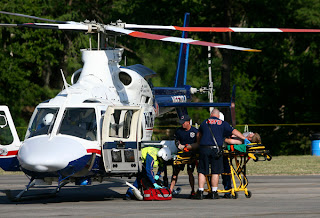 Was he using his rifle to jack up his car?

I mean how did this occur?

I guess he had the rifle in his trunk and moved to get to his spare tire and it discharged?

Whatever, I hope he recovers soon.


NEW BRAUNFELS - A 31-year-old Corsicana man accidentally shot himself in the stomach while trying to change a tire on his pickup truck Tuesday evening in the parking lot of a river outfitter, police and witnesses said.

The man, whose name police Sgt. Tim Brinkkoeter did not have, was flown by helicopter to Brooke Army Medical Center in San Antonio, Brinkkoeter said. He said the shooting was an accident.
Posted by Sam at 7:21 AM