Stupidhead of the week award goes to..... 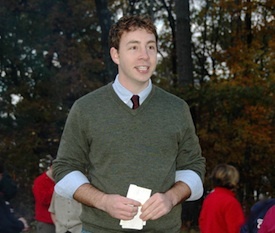 Whose name should probably be changed to Fatthead.

If for nothing else just because he made me agree with some thing posted in the Daily Kos.


So what's a worse offense? Being in the country illegally, or rape? If you're Massachusetts GOP state Rep. Ryan Fattman, it's the first one. Via ThinkProgress, here's what Fattman has to say about violent crime against women.


Mr. Fattman dismissed concerns of some law enforcement officials — cited by the governor — who said using local police to enforce immigration laws could discourage reporting of crime by victims who are illegal immigrants. Asked if he would be concerned that a woman without legal immigration status was raped and beaten as she walked down the street might be afraid to report the crime to police, Mr. Fattman said he was not worried about those implications.
“My thought is that if someone is here illegally, they should be afraid to come forward,” Mr. Fattman said. “If you do it the right way, you don’t have to be concerned about these things,” he said referring to obtaining legal immigration status.

So it's free rein for rapists, provided they prey only on women who might be undocumented. Cuz, hell, they deserve to live in fear. This reminds me of something John Cole wrote in response to a previous Republican horror: "If these guys were comic book villains, no one would buy it because it’s just too over the top."
Posted by Sam at 8:45 AM