You auto not steal! 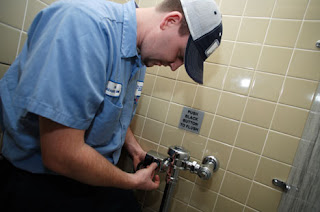 Folks will steal anything not nailed down, won't they?

COLUMBUS, Ohio (AP) — A restroom rip-off in central Ohio has automatic flushers disappearing from the bathrooms at restaurants and other businesses.

Police say it's been happening in at least a couple Columbus suburbs. Investigators don't know if the thefts are related.

Handyman John Hahn tells WBNS-TV (http://bit.ly/yGqJ3c ) the flushers are likely being stolen for scrap because they contain a metal called red brass that can bring $2.50 per pound.